The Difference Between LED Displays and LED TVs 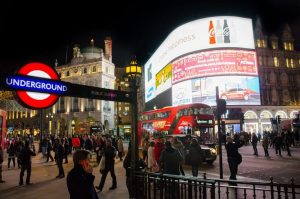 LED stands for light-emitting diode, and they are the most popular lighting method of screens and displays today due to their brightness, wide colour spectrum and low power consumption. But did you know not all LED screens work the same way? In this article we’ll cover the differences between LED TVs and LED displays.

You may have heard of LCD and LED TVs and not know what the difference is. Well it’s actually pretty simple, both types of TV use an LCD panel, which stands for liquid crystal display, but LED is referring to how the screen is backlit. Traditional LCD screens are backlit by cold cathode fluorescent lamps (CCFLs) and LED screens are either edge-lit or full array lit by LEDs.

Edge-lit screens are lit by a row of LED lights around the rim of the screen, with a diffusion panel which directs the light evenly across the whole display. Direct full array backlighting is a panel of evenly spaced LEDs that light up the screen from behind. The latter method provides the ability of full array local dimming, which means individual parts of the screen can be darkened, giving a greater contrast between light and dark parts on-screen.

If you’ve ever seen one of those big digital advertising boards, that is an example of an LED display. LED displays are a panel consisting purely of tiny LEDs as the pixels, in clusters of red, green and blue diodes. As the pixels are made of LEDs, they are self-illuminating and don’t require any backlighting.

The display at the Fremont Street Experience in Las Vegas is one of the largest LED video displays in the world today, and was a huge technological feat back in 1995 when it first opened to the public. It was funded by an original investment of $70m, and was the biggest LED display of its time. It still holds up as the second largest video wall in the world, after a few upgrades as technology has advanced.

So, What Are the Differences?

Despite them having the same acronym in their name, they’re not identical. LED TVs are really LED-backlit LCD TVs, but that’s quite a mouthful, so it gets simplified to LED TV. Whereas, LED displays are self-lit panels using individual coloured LEDs to create an image.

We supply and install LED displays from video walls and digital signage, to screens in the office for presentations and videoconferencing. We partner with leading display technology companies such as LG, Optoma and Datapath to ensure we provide a high-quality, professional solution. Get in touch for a free demonstration on 0800 368 7358.